My current game, Dragon Age Legends, was released this week. I wrote the following post as designer notes on the economy system.

Many successful Facebook games are persistent management games. In FarmVille, the player plants and grows a prosperous farm. In Millionaire City, the player designs and constructs a bustling city. These games give players a certain number of resources to spend on development and then reward their smart moves with more money to invest, creating a positive feedback loop. The money players earn enables them to buy more things that will earn them even more money for more things and so on.

While this mechanic forms the solid underpinning of most management games, it creates two problems for long-term, persistent play. First, as the gameplay is stretched over months (instead of a few hours in the case of non-persistent games like SimCity), the amount of interaction required for each visit is quite small – place a building here, drop a road down there, etc. Therefore, most social games add UI busywork to fill up the player’s time – plowing, seeding, and harvesting every plot for farming games or clicking on each energy, food, and wood icon that appears in FrontierVille. In actual time spent, these often mindless activities comprise the bulk of each play session.

Second, these games often lack a sense of purpose outside of simply growing the player’s ability to continue growing. If the only reason to earn more money is to invest in items that will earn more money, the game eventually loses players not interested in pursuing purely aesthetic goals. At some point, maintaining a city begins to feel more like clearing the weeds or doing the laundry than playing a game.

The turn-based combat of Legends solves both problems at once. The tactical battles occupy the majority of the player’s time within the game, and they are clearly not mindless click-fests, challenging the player and rewarding smart moves. Furthermore, the battles give the persistent castle an actual purpose; expanding the castle is not an end in and of itself. Instead, the output of the castle is consumables the player can use in combat: health potions, mana salves, shard bombs, and so on. 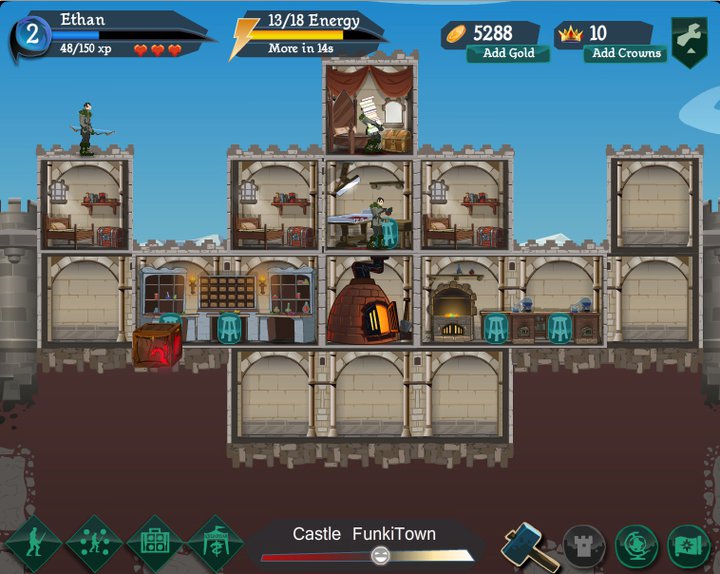 Indeed, the way consumable are handled in Legends is meant to improve on their use in traditional RPGs as well. Traditionally with these type of games, hoarding is quite common as the player is uncertain what is around the corner – what if she uses too many potions and will not be able to tackle the later game as the difficulty increases? Turn-based RPGs suffer even more as the player is usually choosing between a repeatable skill and a consumable item, which means that the power of the latter has to greatly outweigh that of the former to be worth the permanent loss of the item.

Legends solves this problem with a few simple changes. First, consumable use does not end a character’s turn; instead, it is an optional step. The character can either shoot an arrow or drink a potion and shoot an arrow. Thus, by passing up the use of a consumable, the player is forfeiting an opportunity and needs only to weigh the effect of the item versus its permanent loss.

Second, the game’s core stats, health and mana, do not regenerate as they do in most RPGs. Health does replenish but only outside of combat and only in real time – one point of damage per hour. As for mana, characters receive only one or two free points at the start of combat, enough to use a couple skills per battle. Thus, if players want to restore their health and mana, they need to rely heavily on their consumable items – health and mana potions, injury kits, and mana salves. As long as battles are balanced correctly, consumables become the fuel that players use to power though DAL’s combat.

However, Legends also differs from traditional RPGs because the player is actually in control of the supply of consumables, via the castle. The core of a player’s castle are the workshops – the apothecary (for crafting potions), the infirmary (for salves), and the alchemy lab (for bombs) – which can create consumables over certain timed increments. For example, the player can place a worker in the apothecary to create 2 health potions in 30 minutes of real time. Giving players this control frees them from the anxiety of depleting their limited supply of items. With Legends, players can always invest time and gold into their castle to start rebuilding their supply.

Indeed, the two halves of the game – the castle and the combat – create a self-sustaining economic loop. Gold earned from fighting battles and completing quests can be invested into expanding the castle and upgrading its rooms. Accordingly, maintaining the castle and tasking workers to create items provides the potions, salves, and bombs the player needs to defeat the increasingly difficult monsters encountered over the course of the game.

Thus, the two parts of the game fit together and buttress each other. A well-supplied character will lose less battles, earning more gold that can be invested in the castle. A well-maintained castle will create more consumables for the the player to use in combat, increasing the odds of success. The combat and the castle provide context for each other, motivating the player to keep fighting and to keep building.