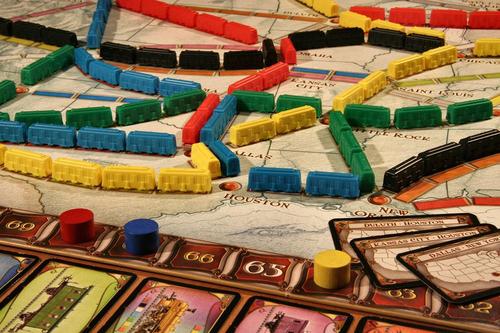 This is not a review of Ticket to Ride, which is – needless to say – a wonderful game, both for experienced gamers and for those weened on Monopoly and Life. If you’ve never played it, stop reading right now and go here to play for free. (Their publisher, Days of Wonder, has an interesting business model as well – their online games are free-to-play but pay-to-host.)

No, what I would like to talk about is the story of Ticket to Ride. Since you have played the game (seriously, just go do it), reflect for a moment on what the game is about. During the game, you lay tracks to connect distant cities while trying to block your opponents from finishing their own routes. There are sub goals too, like having the longest contiguous rail line and completing your network first, which ends the game for everyone. It’s essentially a simplified version of Railroad Tycoon, right? Right?

Let me quote from first page of the game rules:

On a blustery autumn evening five old friends met in the backroom of one of the city’s oldest and most private clubs. Each had traveled a long distance – from all corners of the world – to meet on this very specific day… October 2, 1900 – 28 years to the day that the London eccentric, Phileas Fogg, accepted and then won a £20,000 bet that he could travel Around the World in 80 Days.

Each succeeding year, they met to celebrate the anniversary and pay tribute to Fogg. And each year a new expedition (always more difficult) was proposed. Now at the dawn of the century it was time for a new impossible journey. The stakes: $1 Million in a winner-takes-all competition. The objective: to see which of them could travel by rail to the most cities in North America – in just 7 days.

Ticket to Ride is a cross-country train adventure. Players compete to connect different cities by laying claim to railway routes on a map of North America.

What?!? This storyline makes the game sound almost like a spiritual successor to Around the World in 80 Days instead of what it actually is – another link in the great chain of railroad tycoon games. The fiction simply does not match the gameplay. For example, why does a player “claim” a route just by riding on it? Do the trains shut down, preventing anyone else from using that line? On the other hand, “claiming” routes matches perfectly with the fiction of ruthless rail barons trying to monopolize the best connections.

This disconnect leads to some interesting questions. Does a game’s designer have the right to tell us what the “story” is if it doesn’t match what’s going on inside our own heads while we are playing the game? And if the designer doesn’t have this right, then does a game’s official “story” ever matter at all because it can be invalidated so easily? However, setting the game in the world of trains was clearly very important – if Ticket to Ride was a game about bus lines, I doubt it would have nearly the same resonance. Once again, setting trumps story in importance…

6 thoughts on “Ticket to Ride”