Game design and economics have a spotty history. Designing a fun and functional economy is no easy task as many design assumptions tend to backfire when they come in contact with the player. For example, the early days of Ultima Online were infamous for the game’s wild and chaotic economy. Zachary Booth Simpson wrote a classic analysis of UO in 1999, detailing some of the more notable problems experienced at launch:

MMO economies have come a long way since then; World of Warcraft‘s auction house is now a vibrant part of the game’s economy and overall world, with many players spending much of their time “playing the market” to good effect. CCP, developers of EVE Online, even hired an academic economist to analyze the flow of resources and the fluctuation of prices within their game world. Indeed, understanding the potential effect of market forces on gameplay is an important ability for designers to develop.Can the Market Balance the Game?Many designers have used economic game mechanics as a tool for balancing their games. For example, in Rise of Nations, every time a unit – such as a Knight or Archer – is purchased, the cost of future units of the same type goes up, simulating the pressure of demand upon price. This design encouraged players to diversify their armed forces, in order to maximize their civilization’s buying power. By allowing the “values” of different paths and options to float during a game, designers present players with a constantly shifting landscape, extending replayability by guaranteeing no perfect path to victory.However, if taken too far, efforts to auto-balance by tweaking the economy can destroy a game. In 2006, Valve conducted an interesting economic experiment within Counter-Strike: Source, implementing a “Dynamic Weapon Pricing” algorithm. According to the developers, “the prices of weapons and equipment will be updated each week based on the global market demand for each item. As more people purchase a certain weapon, the price for that weapon will rise and other weapons will become less expensive.”Unfortunately, the overwhelming popularity of certain weapons trumped the ability of the algorithm to balance the game. For example, while the very effective Desert Eagle skyrocketed to $16,000, the less useful Glock flatlined at $1, leading to some extreme edge cases (such as the pictured “Glock bomb”). A game economy is not a real economy; not everything can be balanced simply by altering its price. Gamers just want to have fun, and if the cost of the option considered the most fun is constantly tuned higher and higher until the price becomes prohibitive, players may not just alter their strategy – they may simply go play another game. The current price of gas may be making our real lives “unfun”, but only one real-world economy exists, leaving us no choice. Gamers are not in the same situation.Ultimately, designers should remember that achieving perfect balance is a dubious goal. Players are not looking for another game like rock/paper/scissors, in which every choice is guaranteed to be valid, essentially encouraging random strategies. Players are motivated by reasons beyond purely economic ones when playing games. Raising the cost of a player’s favorite weapon is simply going to feel like a penalty and should only be done if the imbalance is actually ruining the core game. 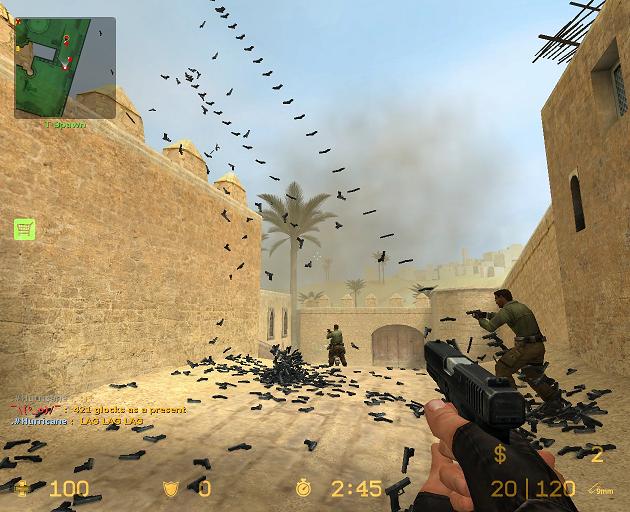 Putting the Market Inside the GamePerhaps a more appropriate use of economic dynamics is as a transparent mechanic within the game itself. The board game world provides some great examples of such free market mechanics at work. German-style games Puerto Rico and Vinci both use increasing subsidies to improve the appeal of unpopular roles and technologies, respectively. In the case of the former, every turn no player decides to be the Craftsman, one gold piece is added as a “reward” for choosing that role. As the gold increases slowly, few players will be able to resist such a bounty, which nicely solves the problem of making sure all roles are eventually chosen.Puerto Rico still has some clearly better and clearly worse options – they just change from turn to turn based on the current reward. In this case, auto-balancing actually keeps the game fun because players are rewarded for choosing less common strategies, instead of being penalized for sticking to their favorites. Perhaps more importantly, the effects of the market are spelled out clearly for the players ahead of time, so that no one feels the game is biased against them.Perhaps the most elegant example of a pure free market mechanic based around actual resources and prices can be found in Power Grid, another German-style board game. In this case, players supply their power plants with a variety of resources (oil, coal, uranium, and garbage), all of which are purchased from a central market. Resource pieces are arranged on a linear track of escalating prices. Every turn, X new pieces of each resource are added to the market, and players take Y pieces away as purchases. As the supply goes up and down, the price correspondingly goes up and down, depending on where the next available piece is on the market track.By making the supply-demand mechanic so explicit and transparent to the players, the market becomes its own battlefield, as much as the hex grid of a wargame might be. By buying up as much coal as possible, one player might drive the price out of the range of the player in the next seat, causing her to be unable to supply all her plan

ts at the end of the turn, a disastrous event in Power Grid. Thus, with a true open market, price can be used as a weapon just as much as an arrow or a sword might be in a military game. 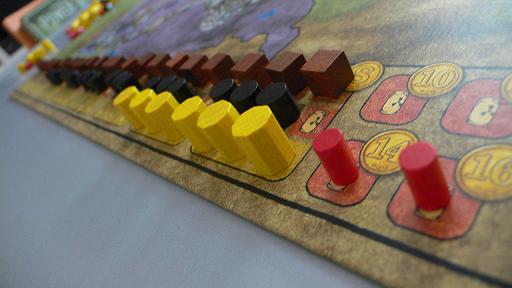 The Benefits of Free TradeSimilarly, a number of modern strategy games, including Sins of a Solar Empire and the Age of Empires series, have included free markets in which players could buy and sell resources, influencing global prices with their actions. These markets serve as interesting “greed tests” in that players are often tempted to sell when they need cash or to buy when they are short on a specific resource, but they know in the back of their minds that each time they use the market, they are potentially giving an advantage to another player. Buy too much wood in Age of Kings, and your opponents can make all the gold they need selling off their excess supply.Unfortunately, the market dynamics of these games tend to repeat themselves, with prices usually bottoming out once the players’ total production overwhelms their needs. This effect stems from the fact that the game maps emphasize economic fairness – in AoK, each player is guaranteed a decent supply of gold, stone, and wood within a short distance of their starting location. Spreading resources randomly around the map could lead a much more dynamic and interesting market mechanic but at the cost of overall play balance for a game with a core military mechanic. If your opponents attack with horsemen, what if there is no wood with which to build spearmen, the appropriate counter unit?However, a game with a core economic mechanic does not suffer from such limitations. In most business-based games, specializing in a specific resource is a basic part of the gameplay. Thus, a free market mechanic can become a compelling part of a competitive game. The ultimate example of such a game is the ’80s classic M.U.L.E., in which four players vie for economic dominance on a newly-settled world. Although only four resources exist (food, energy, smithore, and crystite), economies-of-scale encourage players to specialize. More importantly, players can rarely produce all the resources they need on their own, requiring them to buy directly from other players.The game has a brilliant interface for facilitating this trade between players. Buyers are arranged along the bottom edge of the screen, with sellers on the top. As buyers move up, their asking price goes up accordingly. As sellers descend, their offer price decreases as well. When the two meet in the middle, a transaction occurs. Once again, the mechanic is explicit and transparent – player inventories and market prices are all clearly visible to everyone. Players understand that they either have to adjust their own prices to make a deal happen or hope that their rivals cave. Knowing how desperate another player might be to acquire the energy needed to power his buildings or the food needed to feed his labor, the temptation to pull ever last penny from him is strong. In such a case, prices tend to fall only if the player is afraid someone else might sweep in to reap the profits! The game mechanic mined here by M.U.L.E. is deep and rich. Impoverishing one’s enemies can be just as much fun as destroying them.