If video games and board games are cousins, then they are starting to behave like they belong to the European aristocracy. The two formats are intermixing such that the artificial line separating the two is blurring, with many digital games now built to resemble board games. Consider the recent mobile games Cabals or Hero Academy; both contain the trappings of board games – including turn-based play, a shuffled deck of game pieces, a visible board divided into tiles, and transparent rules with no hidden modifiers – even though these games only exist in digital form.

Other, more mainstream video games are including select board game elements, such as the collectible card mechanic in Rage. The designers assume that the audience is familiar with board game conventions, so that including cards or dice can be just as useful as any other video game convention in helping players feel comfortable with the design.

Meanwhile, the collision of digital and physical gaming is changing the latter as well. More specifically, the iPad is revolutionizing the board game industry as digital translations of physical games are finally viable. The iPad’s features – a large, high-resolution screen, a touch-based interface, and (perhaps most importantly) a robust infrastructure for selling digital apps – are the perfect combination for digital board games. Eric Hautemont, the founder and CEO of the board game publisher Days of Wonder, expressed his enthusiasm for the device:

The beauty of the iPad is that you could forget about it. Meaning that when you put an iPad between two players, the screen is so well done that you almost forget there are electronics behind that. When you sit down to play Small World on the iPad, you stop thinking about it as an iPad game and just think of it as Small World. In the future, the question of whether something is a “board game” or an “iPad app” or whatever it will be in the future becomes a meaningless question.

Days of Wonder’s business experienced a significant bump from mobile. Since the release of Ticket to Ride Pocket on the iPhone, the boxed version of the game began selling more copies, by a sustained increase of 70 percent. Meanwhile, the iPad version is consistently a top-100 app, selling for a healthy $6.99. (One sign of the healthy iOS market for board games is how well they have maintained a high price point in a sea of 99-cent games; Catan and Samurai both sell for $4.99 while Carcassonne still costs a whopping $9.99 two years after release!) Indeed, since release, the digital versions of Ticket to Ride have outsold the physical one by 3-to-1, which raise the question of whether Days of Wonder is a board game company or a video game company.

The success of digital board games means that they can no longer be excluded from discussions of video game design. However, as board games become increasingly digital, how do they still retain the traits of a board game? Can a board game still be defined as simply one with physical components? What about the aforementioned Cabals or Hero Academy, which exist only in digital form? What about the iOS game Assassin’s Creed Recollections, a real-time variant of Magic: The Gathering, which could not exist without a computer to handle the real-time interaction?

If the physical components are not necessary, then what is the essence of a board game? Why do some games fall into this category and other games do not? Perhaps what defines board games is not their physical elements but their absolute transparency, a philosophy that all a game’s rules should be visible.

For example, the Civilization series is essentially a giant board game that could only be played with a computer to handle all the calculations and record-keeping. The majority of game mechanics are clearly transparent to the player, from how much food a city produces each turn to how much time is needed to discover the next technology.

One area not so transparent was the combat system, still a black box to the player, leading to fears that a tank could lose to a spearman under the wrong circumstances. Civ 4 took steps to fix this problem by providing players with the exact probability of success for each possible battle. Civ 5 went even further, with a detailed graphical widget to show the estimated damage. 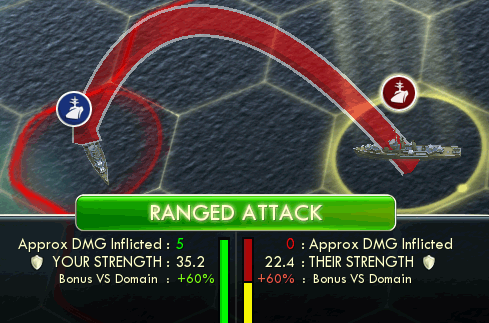 The combat systems of these games were still opaque to the average player (the hard-core, of course, reverse engineered the formulas). However, these features still honored the ideal of transparency by making the results of combat clear; the designers understood that transparency was an important virtue for the series, and the changes were well received by the fans.

One of the most exciting aspects of the digital-physical merger is that some board games are greatly improved in the transition to a video game. First, digital board games require no set-up time or record-keeping, which means that games can be played much faster and in new environments; suddenly, Memoir ‘44 can be played in a coffee shop without scaring away the other customers.

Being able to play a digital board game tens, or even hundreds, of times transforms the experience. A heavy, card-driven historical simulation game like 1960 will probably be played only a handful of times in person, but the Web version allows finishing a game in an hour. The brevity and frequency of games lowers the pain of a loss, which means players can experiment with new strategies without fearing they are blowing their one chance to play the game that month.

However, one challenge of such frequent play is that imbalances are found much quicker than ever before. A Few Acres of Snow, Martin Wallace’s 2011 wargame on the French-Indian War, gained some notoriety for needing a quick patch to deal with a dominant strategy for the English known as the Halifax Hammer. This strategy emerged so soon after release because the game was playable for free on the Web; water found a crack that much sooner.

Another advantage of digital board games is asynchronous play. One of the challenges of board gaming is finding a way to get people together for long, uninterrupted blocks of time. Asynchronous play circumvents this issue by letting people run games at their own pace; the program simply waits for the next player to make her move.

One iOS game, Ascension, owes much of its success to getting this format right. The game was a competent variant to the seminal deck-builder Dominion, but Ascension met its greatest success when it hit the App Store. The developers focused on asynchronous play as not some unusual game mode but as a core feature of the game, enabling players to easily manage multiple concurrent games. Not every board game is ideal for asynchronous play (each turn needs to feature a significant number of decisions), but ones that are should find new life on mobile devices.

Whether played asynchronously or in single-player, digital translations can eliminate the waiting time associated with meaty board games. A certain type of Eurogame with little randomness and no hidden information, typified by Caylus and Puerto Rico, is painful to play with optimizers, who are unafraid to slow the game down to a crawl to ensure they make just the right decision. However, the negative experience of waiting for a slow player can often lead to the mistaken impression that optimization itself is not fun.

Optimization while under social pressure to finish faster may not be fun, but finding just the right move to handle a tricky situation is exactly why these types of games are so rewarding. Analysis paralysis, after all, is also known as intense engagement in single-player games! The problem with playing in person is not wanting to slow down the game while also fearing that rushing will lead to the wrong move.

Both asynchronous and single-player versions of board games solve this problem by giving the player all the time he needs to perfect his plan. Indeed, Puerto Rico comes alive on the iPad, shining as a tight, elegant game that can move at a comfortable speed when a single person gets to make all the decisions. Indeed, the popularity of cooperative board games in recent years, such as Pandemic and Ghost Stories, suggests a healthy market for solitaire video games with a board game soul.

This revelation underscores the value of decoupling the physical characteristics of board games from their defining feature – absolute transparency. The lesson for all designers is that transparency can be a virtue in almost any genre or format. Consider the natural tile-matching patterns in Triple Town, or the predictable enemy behaviors in Plants vs. Zombies, or the simple physical elements in Cut the Rope. These games don’t appear to be board games, but they all share the virtue of transparency.